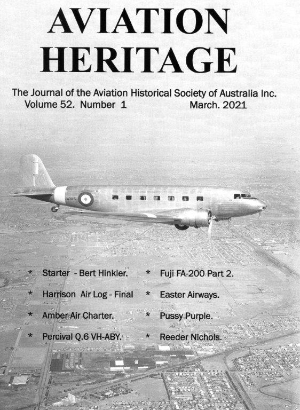 The latest quarterly edition (March 2021) of the AHSA journal – Aviation Heritage – has recently been posted to members. The full contents are listed below:

3 Memorial: Broome, Cable Beach, West Australia by Neil Follett: Details of memorial to Adam James Gaffney, who died in the crash of Piper Seneca I VH-LCK on 11 July 2012.

1978 Piper PA-39-160 Twin Comanche VH-DXA operated by Navair crashed at 11 km NNW of Dubbo, NSW on 18 May 1978. The aircraft was on a flight from Sydney to Dubbo. The aircraft cruised at an altitude of 8,500 feet. The pilot reported to Sydney radio that the aircraft passed Sofala at 2145 hours and that he was estimating Dubbo at 2229 hours. At 2111 hours the pilot advised that he had commenced descent into Dubbo. He then contacted Dubbo Flight Service Unit (KSU) and was advised that the appropriate altimeter setting was 1009 (millibars). Shortly before 2227 hours, Dubbo KSUchecked the cloud base in the area and then informed the aircraft that there were eight oktas of cloud at 1200 feet, with lower patches. The pilot reported to Dubbo KSUat 2241hours that the aircraft was over Dubbo and would be "commencing an NDB descent into Dubbo". Apparently the pilot was unable to make visual contact with the ground at the completion of this procedure and he reported at 2302 hours that he had "missed out" and would make one more attempt. At 2323 hours, in response to an enquiry by Dubbo FSU, the pilot advised that he was "running in-bound again". He called again at 2324 hours and advised that he would "go round and have one more go", adding "if I don't make it this time I'll give it away." Dubbo FSU advised the aircraft at 2329 hours that the main cloud base was now 600 feet with lower patches down to 400 feet. The pilot responded that he would come down to the minimum altitude once more and if the cloud did not break he would "give it away". At 2342 hours he advised that he was outbound for another attempt and the FSU requested that he "call again by time on the hour". The pilot acknowledged this request, and this was the last communication from the aircraft. Search and rescue procedures were implemented when the aircraft failed to respond to calls. The wreckage was found, on the following morning, in a position consistent with the aircraft having been inbound towards the NDB, near the alignment of, but approximately 1000 feet lower than, the specified descent procedure. Initial impact had taken place with a tree, whilst the aircraft was in substantially level flight. The outer panel of the port wing was torn off as a result of this contact. The aircraft rolled to the left and struck the ground inverted, then skidded into an irrigation dam approximately 300 metres south of the tree. There were 2 fatalities. Sources: ATSB; aviation-safety.net website
2009 A Tiger Airlines A320 en-route from Mackay to Melbourne experienced oscillations from aileron faults and diverted to the Gold Coast on 18 May 2009. It transpired that a similar incident on the same plane in 2008 had not been reported. In its report, the ATSB noted that the operator had not complied with the incident reporting requirements of the Transport Safety Investigation Act 2003. Source: ‘Tiger gets rap from ATSB’, Australian Aviation, October 2010, p. 34. via aph.gov.au website