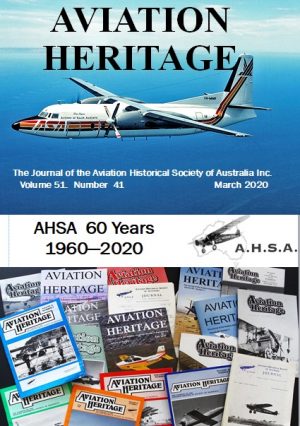 The latest quarterly edition (March 2020) of the AHSA journal – Aviation Heritage – has recently been posted to members.

4 Memorial: Goulburn NSW, Vengeance A27-29 by Neil Follett: Details of the memorial to Sergeant Leon Patrick Gilbert and Sergeant Alan Kenneth Fleay who were lost in the crash of Vengeance A27-29, at “Kelburn” property, Braidwood Road, Goulburn, NSW.

8 The Starters: HF “Jim” Broadbent by Neil Follett: Jim Broadbent’s attempt to fly from Hanworth UK, departing 29/3/1931, to Australia. His Blackburn Bluebird made a forced landing near Ismit, Turkey on 1/4/1931.

12 Sudden Turbulence in the Early 1970s by Leigh Edmonds: Australian air transport and the Whitlam government.

37 Medical Supplies by Parachute by Neil Follett: An article from The Age newspaper from 27 November 1950 detailing trials of parachute drops of the “storpedoette” by Tiger Moth A17-716 at Moorabbin airport the day before.