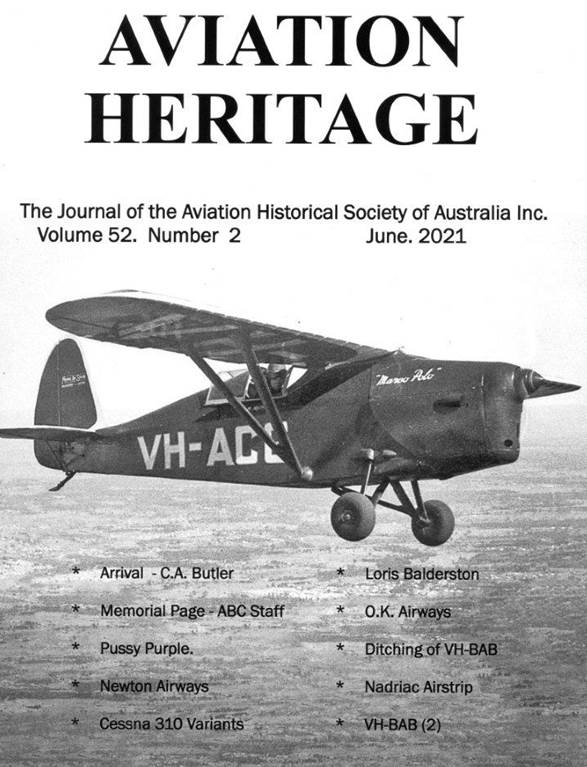 The latest quarterly edition (June 2021) of the AHSA journal – Aviation Heritage – has recently been posted to members. The full contents are listed below:

64 Cessna 310 Variants by Neil Follett: Details of the variants of the Cessna 310 and photographs of Australian aircraft

72 Loris Balderson – Pioneer of RAAF Radio by Laurie Webb: Biography of Loris Balderson who flew with the RFC and played a major part in the design and development of early RAAF radio equipment.

82 The Ditching of Avro Anson VH-BAB by David Prossor: The story of the ditching of Anson VH-BAB off the NSW coast and the successful rescue of its occupants in July 1951

1953 Hawker Sea Fury FB.11 VX762 operated by 850 Sqn RAN collided in mid-air with a DH-82A Tiger Moth at Forest Hill Airport, Wagga Wagga, New South Wales on 17 May 1953. VX762 was one of a formation of six RAN Sea Furies which had taken off from Forest Hill aerodrome, Wagga, for local flying and to return to their base at Nowra. Soon afterwards, at about 10:20 hours, they returned over the aerodrome at low altitude where the leader collided with a civil DH.82A Tiger Moth which had just taken off on local flying practice. The DH.82A Tiger Moth crashed on the aerodrome, the pilot escaping serious injury. The Sea Fury crashed two miles away and the pilot, Lieutenant Commander Reginald Albert Wild DFC, RAN - was killed. He was, at the time, the commanding officer of 850 Squadron, Royal Australian Navy. Sources: ADF-Serials; aviation-safety.net website
1967 Dassault Mirage IIIO(A) A3-77 operated by 2 OCU RAAF crashed into the sea off Newcastle, NSW on 17 May 1967. The aircraft was engaged in training exercises at 4.20pm when it entered a dive and crashed into the sea about 80 kilometres north-east of Newcastle, NSW. 3 Squadron CO Wing Commander Vance Drummond killed. Neither his body nor the aircraft was recovered. Sources: ADF-Serials; aviation-safety.net website
1985 The first two RAAF McDonnel-Douglas F/A-18 Hornet aircraft A21-102 and A21-102 were ferried to Australia in a record-breaking non-stop trans-Pacific flight on 17 May 1985. The 12,360 km (7,680 miles) flight from US Naval Air Station Lemoore, California, to RAAF Williamtown took fifteen hours and was made possible by in-flight refuelling from USAF KC-10 tankers. Each Hornet was refuelled seven times from the accompanying KC-10 tanker as the group headed towards Hawaii from California. South of Hawaii another KC-10 flew out to meet them and refuelled the first tanker. After passing Hawaii, the Hornets were each refuelled another eight times before the epic flight was completed. The flight was led by No 2 Operational Conversion Unit (2OCU) Commanding Officer, Wing Commander Brian Robinson flying the lead aircraft and Squadron Leader Laurie Evans flying the second aircraft. Source: Aircraft of the RAAF, RAAF History & Heritage/Big Sky Publishing, 2021