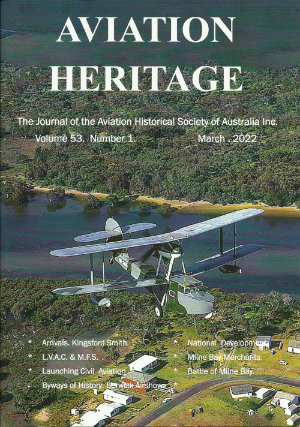 The latest quarterly edition (March 2022) of the AHSA journal – Aviation Heritage – has recently been posted to members. The full contents are listed below:

3 The Arrivals: Charles Kingsford Smith and G.U. Allen by Neil Follett: The flight by Kingsford Smith and G.U. Allen in Avro Ten “Southern Star” VH-UMG carrying the first airmail from London Hamble (departed 7/1/1932) to Darwin (arrived 19/1/1932). This was the return leg of a round-trip from Melbourne to London and back carrying Christmas air-mail.

4 The Starters: H. Shaw by Neil Follett: The attempted flight from London to Australia by H. Shaw in General Aircraft ST-4 Monospar G-ACHS, departing Croydon on 23/10/1933 and ending with the aircraft damaged in Persia on 10/11/1933.

5 Memorial Page: Knockrow, NSW. by Neil Follett: Details of the memorial to the four RAAF members who lost their lives in the crash of Avro Anson A4-20 near Knockrow, NSW on 22/5/1944. They were F/L Ernest Allan Shackell, F/O Trevor Llewellyn Woodgate, W/O Edmund James Kiely Ahern and Sgt Gordon Hill.

15 Launching Civil Aviation In Australia by Dr Leigh Edmonds: A brief history of the commencement of the Civil Aviation Branch, from a talk on 28 March 2021, the centenary of the CAB.

19 German Aviatrix 1930s Marga Wolff called von Etzdorf (Flight to Australia) by Neil Follett: A brief description of Marga Wolff’s attempted flight from Berlin to Australia in 1933 and details of her suicide.

20 Byways of history: Air Pageant Casey Aerodrome, Berwick 1975 by Dave Prossor: Details of the event and aircraft attending the Casey Aerodrome pageant on 23 February 1975. With colour photographs of many of the attendees.

27 For National Development and Defence by Dr Leigh Edmonds: The Australian Council of Defence and the emergence of government policy relating to civil and military aviation, 1918-1920.

Welcome to the AHSA Inc website. Select from the menu bar above, or click on one of the updates to the left.

1940 Lockheed Hudson Mk II A16-97 operated by 2 Squadron RAAF crashed at Canberra, ACT on 13 August 1940. Based at Laverton, A16-97 was the first RAAF Hudson to be fitted with passenger seating and was tasked with flying James Fairbairn, the Minister for Air and Civil Aviation from Melbourne to Canberra for a cabinet meeting. In addition to the RAAF crew of four (pilot FLTLT Robert Edward Hitchcock, PLTOFF Richard Frederick Wiesener, CPL John Frederick Palmer and AC1 Charles Joseph Crosdale), Fairbairn invited three other senior officials to join him on the flight – Geoffrey Street, Minister for the Army; Henry Gullett, Minister for Information, and General Brudenell White, Chief of the General Staff. Fairbairn's private secretary Dick Elford and White's staff officer Frank Thornthwaite were the two other passengers. The Perth Daily News reported: "The plane was seen by watchers at the Canberra Aerodrome and the Air Force station to circle the drome, and then rise and head south. It disappeared behind a low tree-dotted hill. There was an explosion and a sheet of flame, followed by a dense cloud of smoke... The Canberra Fire Brigade and ambulances from Canberra and Queanbeyan, across the border in New South Wales, as well as several Air Force tenders, arrived soon afterwards and fire extinguishers were played on the blazing wreckage. After about half-an-hour, when the blaze had died down, it was seen that the entire undercarriage, wings and structural supports of the plane had been torn away and were a smouldering mass in which were the charred bodies of those on board." The Court of Inquiry into the accident found that it was most likely from the aircraft stalling on its landing approach, resulting in loss of control at a height too low to recover. Sources: aviation-safety.net website; Hazlehurst, Cameron (2013). Ten Journeys to Cameron's Farm: An Australian Tragedy. Canberra: ANU E Press. ISBN 9781925021011