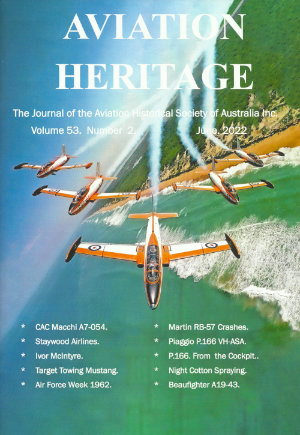 The latest quarterly edition (June 2022) of the AHSA journal – Aviation Heritage – has recently been posted to members. The full contents are listed below:

47 The Arrivals: E.H. Jenkins and H. Jeffrey by Neil Follett: Details of the flight by Harold Jenkins and Harold Jeffrey who departed London 29/12/1931 and arrived Darwin 22/2/1932 in Desoutter G-ABOM (formerly EI-AAD, later VH-UEE and which is now on display at Launceston Airport terminal).

50 Memorial Page: Yarram, Vic. by Neil Follett: Details of the memorial to Herbert Nicol Parkside and his friend Clifford Wynne who lost their lives in the crasch of CAC Wackett Trainer VH-BCP at Yarram, Victoria on 5/5/1959.

52 CAC CA-30 Macchi MB-326H A7-054 by Tony Todaro: Details of engine testing by CAC using the fuselage of A7-054 following its writing off after an in-flight collision.

62 The Tale of a Target Towing Mustang by John Laming: A target-towing episode in the life of CAC Mustang A68-113 at 10 Squadron in Darwin in 1953.

64 Night spraying. Wee Waa, NSW 1974 by Dave Prossor: Details of night-time aerial spraying of cotton in the Namoi district, including background, operators, and a detailed aircraft listing and photographs.