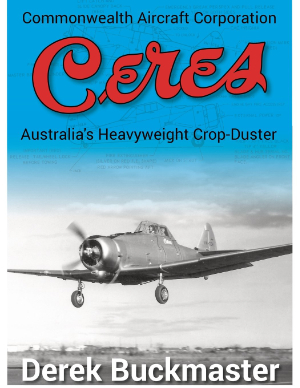 The Ceres agricultural aircraft was produced by Commonwealth Aircraft Corporation (CAC) in Australia from 1959 to 1963. A total of only 20 airframes were produced, but the Ceres was the first civil aircraft produced by CAC – which had previously produced hundreds of military aircraft including fighters such as the Boomerang, Mustang and Sabre, and trainers such as the Wirraway and Winjeel.

This book is the result of more than 15 years of research by the author, and covers the fascinating history of the design, development, flight testing, production and operation of the Ceres aircraft. To provide context for the design of the Ceres, the book covers the development of agricultural aviation in Australia and New Zealand, with a brief summary of the aircraft which were in use prior to the introduction of the Ceres. The individual history of each Ceres aircraft produced is covered, along with impressions of the aircraft from the perspective of numerous pilots and operators.

A full technical description of the aircraft is included, along with excerpts from the Operating Instructions and the Maintenance, Repair and Overhaul Manual. Many unpublished photographs, diagrams and drawings are included. The three major versions of the aircraft are described in detail.

Copies can be purchased from several online bookstores, including the following: