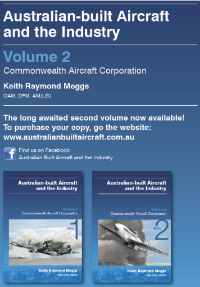 Volume 2 of this encyclopaedic work (containing only one chapter, being chapter 15, spread across two books) is entirely devoted to the history of The Commonwealth Aircraft Corporation, a company, which has played such a huge part in the Australian aviation industry.
‘CAC’ as it was affectionately known by the thousands who worked there was formed in 1936 and was predominantly involved in trainer and fighter production, right through to part-production of the French designed Mirage in the 1980’s.
It developed into the most experienced and productive aircraft design organisation in Australia, originating imaginative world-class design proposals in all categories, most of which foundered because of lack of orders from military and civil operators, or from Government developmental sources.
CAC was also the major engine production centre in Australia, beginning with the Single Row Wasp for the Wirraway, through to the General Electric-F404 for the Hornet.
Apart from the thousands of production aircraft processed, the design projects undertaken, and the production programs investigated by CAC included the following:- Grumman Panther, supersonic fighters, Sabreliner, four engined fighter, Warrior air-superiority fighter, CA30-2F Macchi development, GAC-100 airliner, Boeing CH-47c Chinook, Yakovlev Yak-40, Grumman Tomcat, Lockheed Orion, McDonnell Douglas F-15 Eagle, and many others.
The Commonwealth Aircraft Corporation was taken over by Hawker de Havilland on 1 July 1986.

Copies of this book may be ordered on the publisher’s website:

1943 Lockheed Hudson A16-32 of 1 OTU RAAFwent missing over Bass Strait on 6 July 1943. The aircraft took off from East Sale at 1944 hours to carry out practice D.R. 9. This practice was a night navigation exercise from Base - Flinders - Currie - Hogan Group - Base. The aircraft was on wireless silence and failed to return. The maximum endurance of the aircraft was 7 hours. The aircraft failed to return and all searches proved negative. The crew were listed as missing. They included PLTOFF John James Bowman Serv#410622 (pilot), PLTOFF Alan Joseph Malone Serv#426128 (Nav B), PLTOFF Harry Robert Alfred Guymer Serv#418943(WAG), PLTOFF Alexander Frederick McDonald (Serv3418863 WAG), and PLTOFF John Alexander Buchanan Serv#419453 (air gunner). Sources: ADF-Serials; aviation-safety.net website